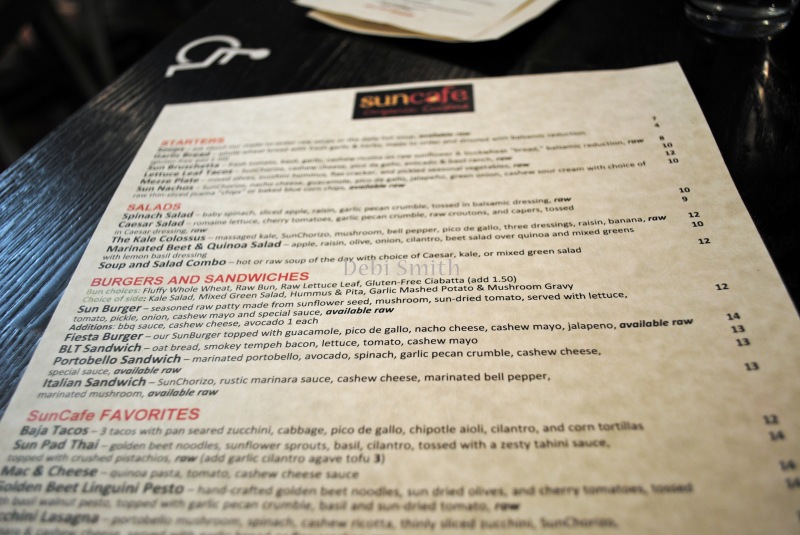 Chaz and I ran off to Sun Café for lunch the day Dawn and her Old Man brought Mara Jade home. We tried to go to Sun Café on two previous visits. First time was a group outing and they were closed. Second time, Chaz overshot it and didn’t feel like circling around.

The staff are knowledgeable about gluten-free issues. It was sad our server felt she had to ask if it was medically related, but it’s Los Angeles, land of fad diets galore and near many studios. They do not have a separate gluten-free menu, but your server can tell you what is gluten-free and what can be made gluten-free with some modifications. 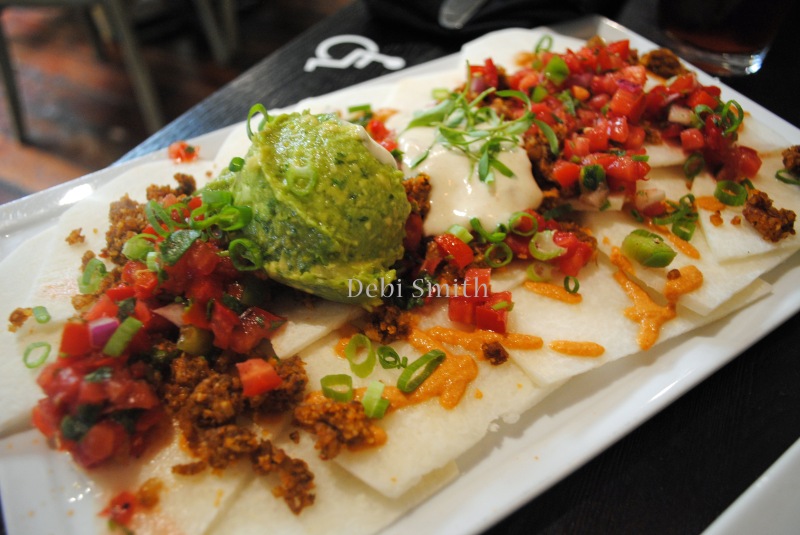 The only problem I was I wanted almost everything on the menu. Not only that, everything on the menu is vegan and many items are raw or can be raw. I settled for the Sun Nachos with jicama chips and a Lemon Ginger Blast. The nachos excited me. I can’t have corn so the lack of tortillas with Mexican food is saddening. Then, Sun Café reminded me that jicama is a perfect swap for tortillas, as my friend Diane taught me. It was my first time eating nachos in a restaurant in a long time. They were delicious and I devoured them. The Lemon Ginger Blast juice was tasty and I forced myself to not drink it down in one go. Because ginger. 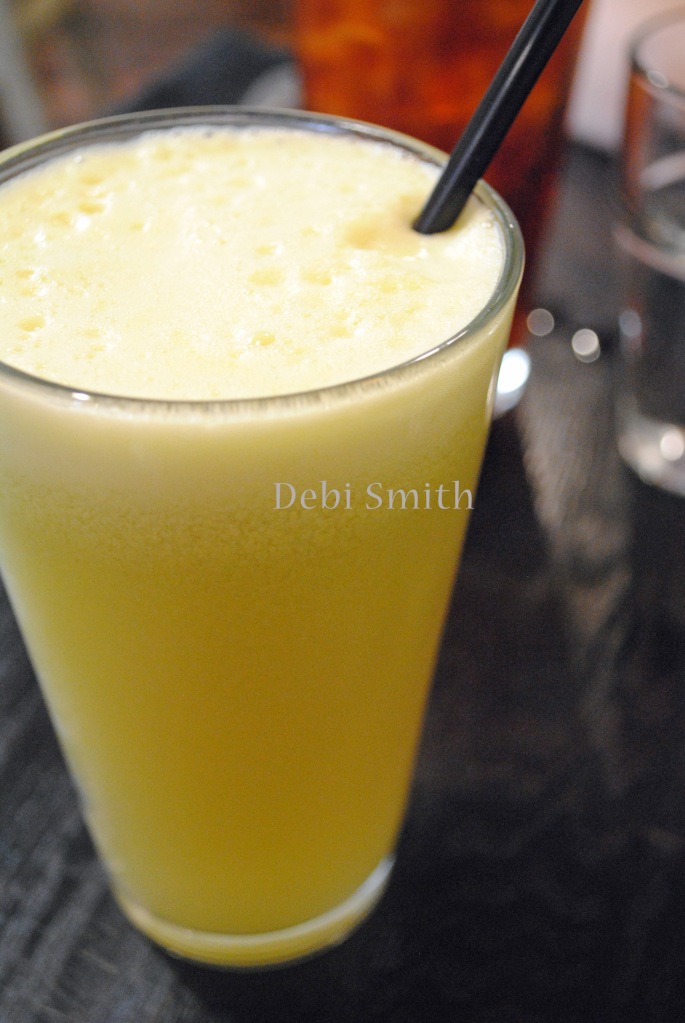 Chaz pointed out two celebrities in the restaurant because I was paying more attention to the menu than my surroundings. Cedric the Entertainer was seated at a booth in our section. I got a ninja shot with my phone. He was cordial and smiling at everyone in the section when he left; saying goodbye and wishing us all a good day when he left as if we were chatting it up beforehand. I call that a class act. 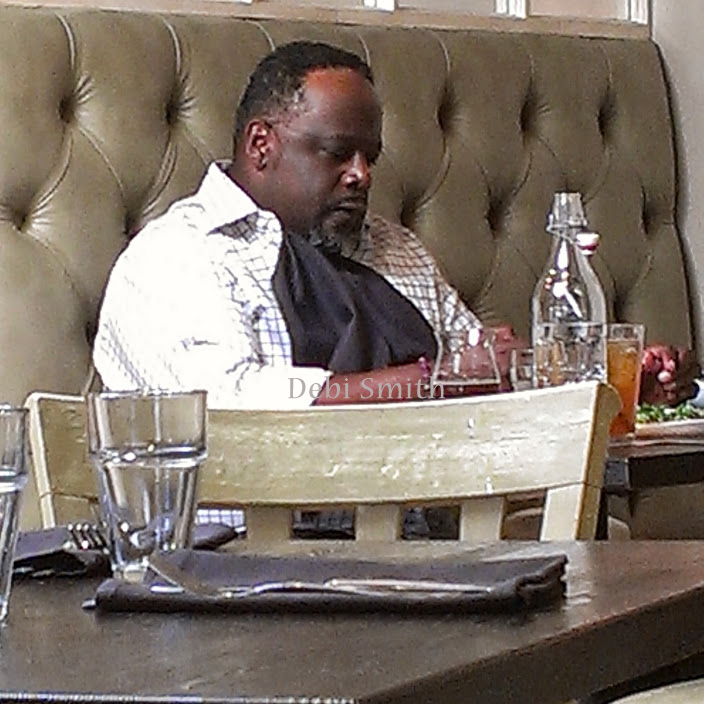 Mila Kunis was talking to some people off to the side behind us. I watched her leave the bathroom before Chaz pointed her out and was thinking how cute her strapless maternity dress was without really paying attention to her face. No ninja shot of her though. That’s okay. I’m just impressed Chaz saw them first. 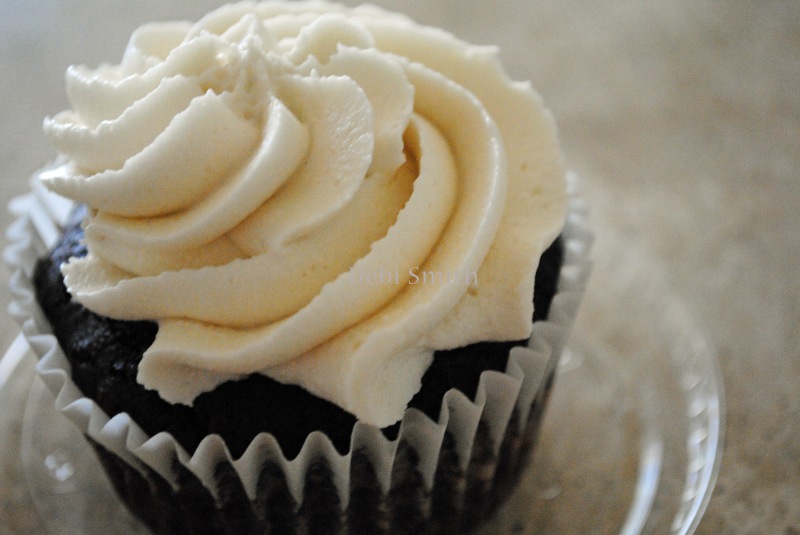 Dessert is ON the table at Sun Café with cupcakes and cheesecakes. They are all gluten-free and your server will give you the run down because they don’t have their desserts on the menu. I took a mint chocolate cupcake to go. When I ate it later that night I wasn’t exactly impressed. I’ve had better, but it was still a cupcake I got to have from a restaurant. I didn’t complain because it wasn’t cardboard. 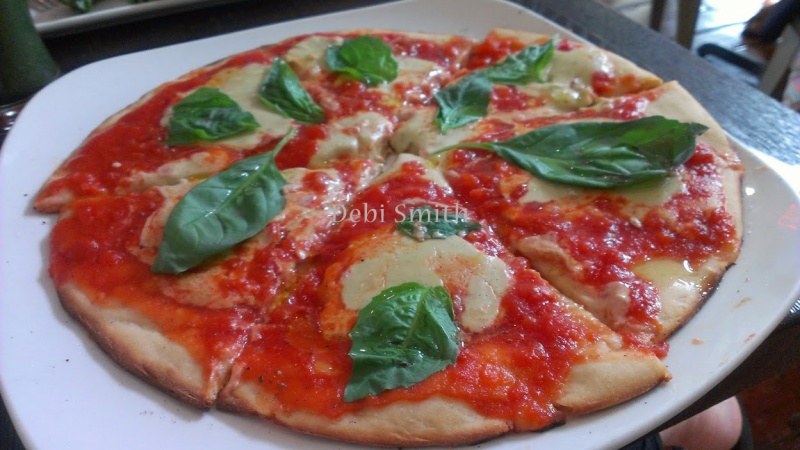 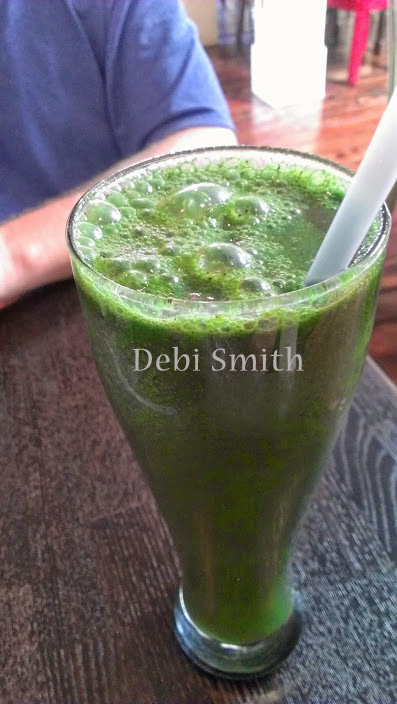 I ordered a Green Protein Smoothie with my lunch and my server asked me if I was sure I wanted it…”…because it’s really green.” It seems people order it and don’t expect the green-ness of it because of the spirulina. It didn’t feel as green as she led me to believe it would be. Then again, I’m used to making my own green smoothies.

This time I ordered the mint chocolate cheesecake to go. Chaz took me to see Guardians of the Galaxy after lunch and that sucker sat in my purse the entire time. If I had a fork (or anything else I could’ve used as an eating utensil), I would’ve eaten it during the movie. In the end, it was much better than the cupcake.

I wanted to go one more time before we left L.A., but Chaz was done. He ate the same thing both times: Portobello Sandwich. 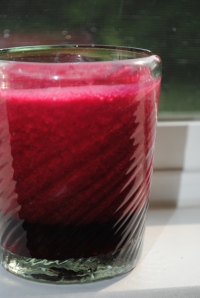 I’ve spent so much time playing with juice rather than other recipes that I feel like I should do a juice series or something.  Ha!

Today I have what I think is my new favorite.  I went with all reds this time.  I still had some beets and apples leftover from making my Wake Up and Berry Beet-O-Full Juices and I wanted to use them up.

This is my kind of juice!

It was another mix that blended well with each other.  At times I thought the apple was coming through, but then I thought it was the raspberries.  It didn’t matter though.  It was just plain good.

Place beet and fruits into the feeding tube of your juicer and juice!

This would be another good juice to turn in to popsicles.  Or freeze some in ice cube trays and use them in smoothies later on.

This post is linked to Seasonal Sunday at Real Sustenance. 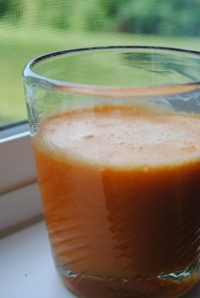 I was messing around with juicing again and came up with something that I think even Heidi’s son (Adventures of a Gluten-free Mom) would love.   I pulled out a mango, two oranges, and a beet.  Then I thought, why a beet?  Why not a carrot?  Let’s make this an orange colored juice.  I put the beet back and reached for a carrot.

Mangoes have lots of fiber.  I mean lots.  One of the things I used to do when constipated is eat a whole mango.  This was when I was back home and friends had mangoes growing out the wazoo and they couldn’t give them away fast enough.  Now, I don’t need to do that.   If I have a whole mango, it’s just party of my natural daily fiber.  They also have Vitamins C, A, E, B6, K, potassium, copper, and lots of phytonutrients (antioxidants!).

Oranges of course have Vitamin C.  They also contain niacin, potassium, riboflavin, thiamine, panthothenic acid, folate, calcium, Vitamin B6, iron, magnesium, zinc, and phosphorus.  Carrots are full of beta-carotene which then metabolize into Vitamin A.

What I loved about this juice was none of the ingredients stood out.  They all blended together for a nice sweet juice to go with my breakfast.  I even started thinking about Heidi’s comments about turning juice into popsicles.  I thought, this would make a great popsicle for these hot summer days coming.

The bright orange color didn’t quite come through in picture because my battery was too low.  Once my camera battery gets low, it won’t let the shutter work.  Darned SLR digital cameras!  Oh well.  Once you make it, you’ll see just how orange it is.

1 mango, pit removed and flesh scooped out of the peel

1 carrot (or more if you want your juice less sweet)

Place all ingredients into the feeding tube of your juice and juice!