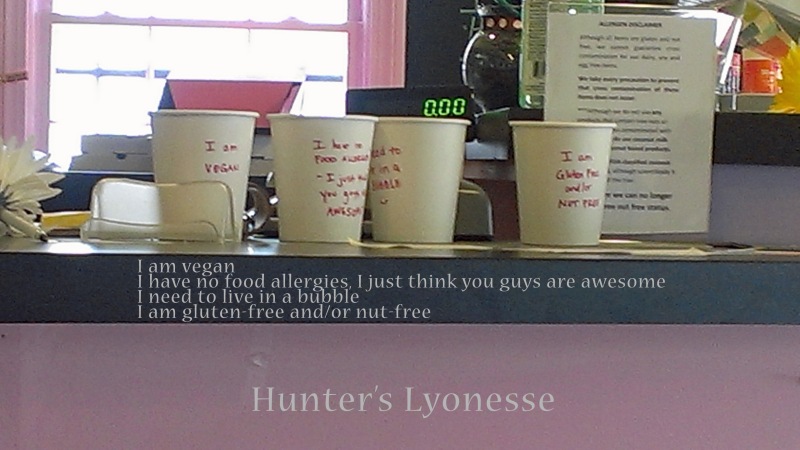 February 1st marks my sixth blogoversary for Hunter’s Lyonesse. Much has changed in the gluten-free community through the years, but it’s not all good. We are in a crisis right now and most won’t admit to it. Microcomplaints get more attention than our fellow Celiac/NCGS people who are sick because of companies dealing in shady practices to fit within FDA regulations. Advocacy is by the wayside. People would rather jump on a brand loyalty bandwagon than stand up for our fellow gf community members sick from “gluten-free” products when science shows the products aren’t safe. Vilification of victims and profit is now more important – and more comfortable – than everyone’s health.

No one knows what advocacy is anymore. Not all bloggers are advocates. Bloggers doing only sponsored posts and monetizing their blogs, push product and call it advocacy. That’s not advocacy, that’s an oxymoron.

Advocacy is the public support for or recommendations of a particular cause or policy. In my twelve and a half years working in mental health, it also meant speaking for those who didn’t have a voice, ensuring clients had needed services, and that service providers were providing services.

As a blogger, my readers became my clients. When I spoke up on an issue, it was on their behalf – either to educate them or to effect change for the community. Service providers became the organizations and food companies. Even though I fight for my readers, I also fight for those without access to all this information so they don’t get sick. Those with less resources than we do have less recourse and that’s not fair to them. None of us asked for this chronic disease or way of life.

Maybe it’s the natural advocate in me that was honed through my career, but I refuse to be a bystander when people are being misled outright lied to all for the fattening of wallets that are not our own.

Several weeks ago, I asked Beyond Celiac (formerly NFCA) a pointed question about the GFCP (Gluten-Free Certification Program, endorsed by BC) allowing self-declaring of gf ingredients in response to an issue with ALDI’s gf chocolate chip granola bars – gf malt extract is listed in the ingredients that is actually derived from barley.

What I got – along with a handful of others asking the same question – was canned answers and links to Beyond Celiac’s Q&A page. The answers we sought were not on that page.

This happened two days after Gluten Free Watchdog put the word out about the granola bars and a full day after Tricia updated readers that the malt extract was sourced from barley. So not only are they not giving straight answers, they aren’t informing their followers of serious issues in a timely manner. It’s like getting a tornado warning after the fact.

Unacceptable. We have a reasonable expectation to receive straight answers. I see through the rhetoric and it’s frustrating to watch everyone accept it without question. We deserve better. This is our health at stake.

Self-declaring certification is like when Post announced their Pebbles cereal was certified gluten-free. Who certified it? Themselves. Certification means nothing without third-party verification. Next time you pick up a box with the GFCP logo, think twice because anything derived from wheat, barley, or rye is allowed to be an ingredient under that “certification.” Yet, it happened because there are not enough third-party checks and balances.

Thanks to the advocacy of individuals in the community, the granola bars were pulled from the shelves. However, when it comes to Cheerios and Lucky Charms, heads hide in the sand and the erroneous belief is spread that the recall in October took care of the “problem.” Only a handful of us wants to advocate for General Mills to source purity protocol oats and change their mean testing method to individual samples so the continued glutenings stop. Tests of Cheerios not involved in the recall showed a wide variance in the ppm, along with results over 20ppm. This shouldn’t be happening, but everyone’s silence and denial allows it to continue.

When BC was still the NFCA, they gave Domino’s an amber designation for their gf pizza, but told those with Celiac that it wasn’t safe – no dedicated area or toppings for making the gf pizza. Many bloggers saw how dangerous and confusing this was and we voiced our displeasure on our blogs and social media, effecting change for the good of our gluten-free community.

In the case of “gf” Cheerios, the big picture was laid out before me and my friends when GFWD reported the facts – if GM got away with mean testing and not using purity protocol oats, other companies would follow suit. Through all the advocating, Tricia went digging and compiled a list of suppliers and manufacturers of purity protocol oats. To our surprise, other companies were already doing what GM is doing. I urge you to go to the list (link at the end of the post) and bookmark it to reference when you’re looking for gf oats.

Where is BC when those in our community report getting sick from “gluten-free” Cheerios, and now “gluten-free” Lucky Charms? What were they doing between GFWD announcing the gf malt extract ingredient and when they did? Why is GFWD doing all the reporting to the FDA on these illnesses and issues and not them? Or Celiac Disease Foundation for that matter? Or Celiac Support Association?

Why aren’t these advocacy organizations stepping in to advocate for us and saying, Enough? Why aren’t they spreading the word to food banks so those in the community without access to the internet can be informed if they go in and want a box of the newest gf product that really isn’t safe? Why aren’t they advocating with the FDA for labeling regulations that benefit us, not the manufacturers?

Why aren’t bloggers standing up to say, “This is wrong. We want better from you or you don’t get our dollars.”? Why are they so quick to run off to a company for biased information about a new product and then present it to us like it’s the best thing ever without even giving readers the whole picture? Why aren’t they telling readers to whom and how to report their reactions to processed foods labeled gf? Why are we accepting this from them? Why do we keep reading blogs who only do sponsored posts, receiving some form compensation from companies? How is this really helping us as individuals? Where is the education? Where is the advocacy? 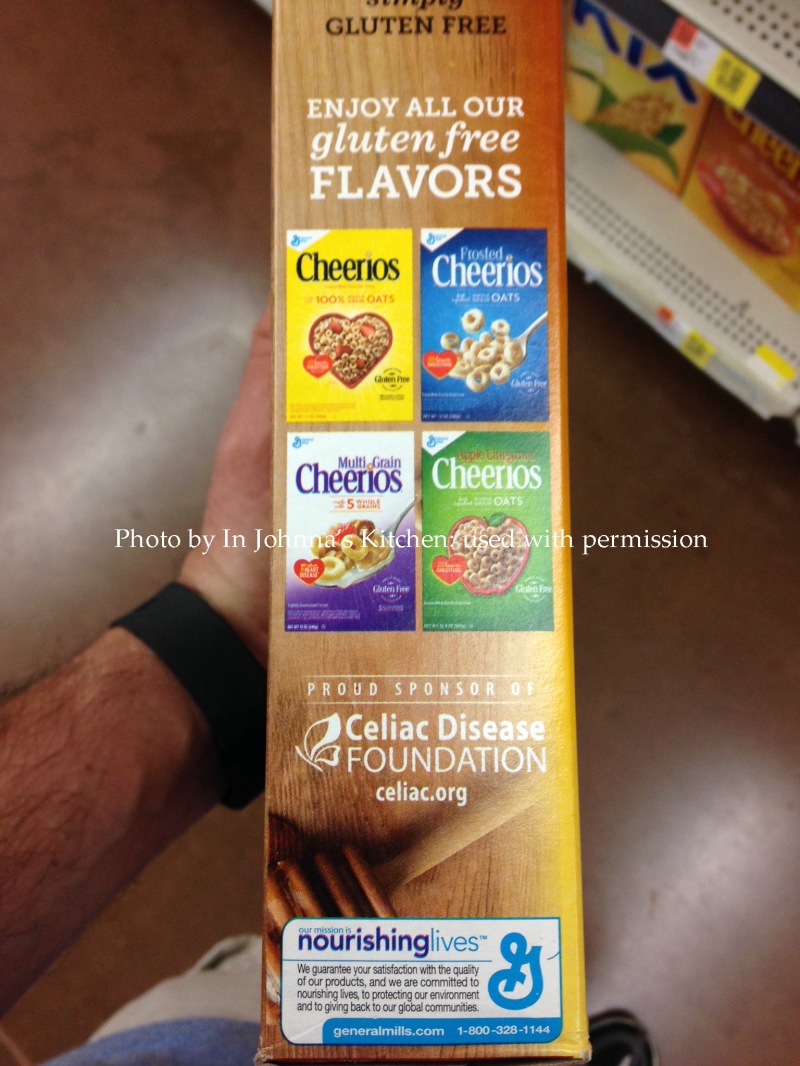 Does the Celiac Disease Foundation really have our best interests at heart now that they are being sponsored by Cheerios?

The CDF’s logo is on all the gf Cheerios boxes. That tells me that they’re more interested in money than fulfilling their mission statement. They can’t improve our quality of life while accepting money from a company that has made/continues to make our community sick. That’s not advocacy.

Six years ago, my fellow bloggers and wanted to create great recipes with silly/interesting/poignant stories to tell with them. We wanted to be a wealth of information for our readers, especially those new to the diagnosis. We did what we did for the readers. When problems like Domino’s came up, we rose together to tell everyone, “We aren’t going to take it.”

You can’t serve two masters. Bloggers, organizations, and magazines need to refuse money from the companies making our community sick. Taking money and calling themselves advocates is contradictory at best. They need to take a stand when we are wronged. They need to speak out more on our behalf, acting in our best interest. We are in this community together because of health needs, not for arts and crafts or feel-good-hippie-vibes. Our health is the priority. Bottom line. Period.

They need to point their readers in the right direction when they report getting sick instead of, “Maybe the next box.” Fuck that. If something makes me sick, I don’t go near it again – even before going gf. I haven’t bought anything from Food For Life since their brown rice tortillas made me six five and a half years ago. That rotisserie chicken that my mother loves so much I refused to ever eat again after getting violently ill in high school. Brain fog might have messed with my memories the last seven years, but things like that stick with you.

Heat sink map of 169 illness reports from “gluten-free” Cheerios on the Change.org petition as of 9/29/15. Note how the majority of reports are on the opposite side of the country as the Lodi plant and that this was BEFORE the recall. Map by In Johnna’s Kitchen, used with permission.

Sharing recipes and information for readers shifted into worshipping and selling gf processed foods to the detriment of our community. Instead of taking advantage of this new life without gluten and opening the doors to the wide variety of fresh foods available to us, some refuse to the cut the emotional ties to the processed foods of our former gluten-full life. Marketing specifically tugs on our heartstrings so we’ll open our wallets and scream, “TAKE MY MONEY!” That’s what marketing is supposed to do – and we buy it, every single one of us. When you do that and then rigorously defend your choices about buying a product that makes many others sick, you put everyone at risk. I recently saw someone comment that every kid needs Honey-Nut Cheerios. No. No, they don’t. Every kid needs a safe place to grow. Every kid needs good parenting to feel secure. Every kid needs to blow bubbles, laugh at silly jokes, and make mud pies. Every kid needs to know they are loved and that their loved ones believe in them.

We, as individuals, need to be more discerning about where we donate our money, which magazines we subscribe to, which blogs we follow, and what’s really in our food – don’t stop reading labels. We need to use our critical thinking skills. We need to watch the advocates as they report news, help them spread the word, and take note of those who come late to the party.

Anyone using the disclaimer that a product may or may not be safe for Celiacs/NCGS or that you should use your own judgement is doing two things: 1) selling you something, and 2) covering their ass because that product is definitely not safe for anyone who needs to be gf. Remember first and foremost, gluten is gluten and will do what it does to all of us who can’t have it whether we feel it or not. It takes up to 72 hours for symptoms to manifest – if they do. Eat enough of the food making everyone else sick and you’ll have an accumulative effect while wondering what is making you so sick.

Would you allow a doctor push medication on you that you know you don’t need? Would you pick the croutons off a salad and still eat the salad? If not, why would you buy any product that amounts to the same thing, or give your time/money to any blogger, organization, or magazine promoting said product? Why would you find any of that acceptable to continue to do so?

Right now, Cheerios, Lucky Charms, Quaker, and ALDI aren’t the only issues facing us. Multiple gf products are on the market with malt extract listed. Schar is using “gluten-free” wheat starch in some of their products and opening the door for other manufacturers to do the same. There are gluten-removed beers on shelves mixed in with the gf beers and listed as gf beer on menus – again, removing croutons from the salad. There are no effective tests to show how much barley is left in these beers. If you never noticed before, these beers are not labeled gf – they can’t be per the Trade & Tax Bureau. No alcohol made from a gluten-full grain can be marketed as gf.

I want to challenge you to put advocacy to action.