This is it. No backside for more options.

Mexican food is something I avoided eating out after having to give up dairy. Fixing it at home without cheese was fine because I could use diced avocado to replace the cheese texture for me. But eating out at Mexican restaurants while dairy-free is just not the same at all. Since I was able to tolerate cheese while we were traveling I decided I needed some Mexican food.

We chose Gonzalez Y Gonzalez at the New York New York Hotel & Casino (again) because they have a dedicated gluten-free menu. It’s rare in my world that I find Mexican restaurants with dedicated gluten-free menus. Granted, the menu has only three items, but it is better than trying to go through the entire menu and rule things out. As always, I gravitate to the tacos to tell me how good the restaurant is as a whole. If the tacos are well-seasoned, chances are everything else on the menu is good. Also, I always go for the guacamole to tell me how good they are, too. A condiment/side dish made in-house should always please the palate. 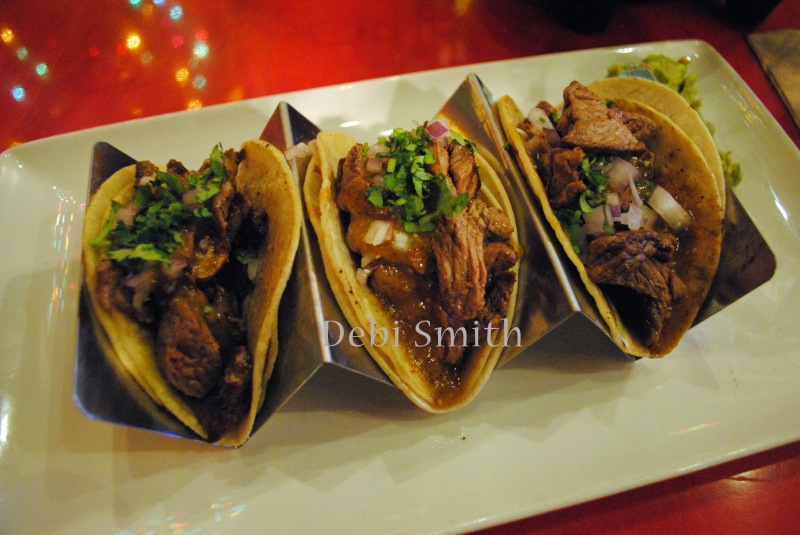 The guacamole was made table side and we were able to choose what went into it. I like my guacamole without a lot of frills because I like the avocado to shine. And when avocado shines, my mouth is happy. For whatever reason, I said okay to jalapeño in the guacamole and nearly choked later in surprise at the heat as it completely by-passed my tongue and hit my throat. No bueno. The guacamole was good and the fact that it is made at the table made it better knowing it was fresh.

The tacos were seasoned reasonably well. Not as well as I would have liked, but considering we were much closer to the Mexican border than we are in Ohio, the quality of Mexican food increases exponentially. Seriously. I never understood how good I had it in Southern California until I was in Kentucky and everything was just…blah. It was not an issue when I was home in Hawai`i. I always made my own because if I went out, it was for local food, not Mexican. Unless I was going to Compadres with friends, but that’s a different story. Suffice it to say, my mouth was a lot happier with the Tacos Carbon than they are with the Mexican food in Cincinnati (and Kentucky).

How do you follow up a good Mexican meal while in Las Vegas? Walk over to the Coca-Cola store and M&M store, of course!

I may not be able to have M&Ms anymore, but it doesn’t stop me from enjoying the store! 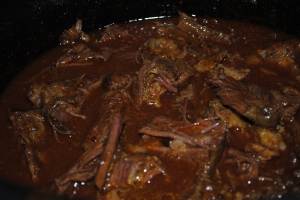 Hello.  My name is Debi and I’m a Chipotle-holic.   How do I love Chipotle?  Let me count the ways.

1.  I can eat pretty much everything served, except anything with flour tortillas.  That’s a rarity for someone on a gluten-free diet.

2.  They are a socially responsible corporation, using local produce when possible and animals that are raised free-roaming without antibiotic treatment.

3.  There are so many combinations to try.

There is something about that barbacoa meat that I just crave.  It’s a spicy meat and I’ve tried their other meat options, but I always get the barbacoa.  It could be that it is well seasoned.  So well seasoned that it’s spicy.   And I’m not one that digs a lot of spice.  However, I think because it’s “Mexican” food and most Mexican places in the Mid-West  don’t season their meat at all, I’m drawn to it simply because it is seasoned.

I usually order the Barbacoa Bowl, no rice, black beans, fajita veggies, pico de gallo, and guacamole.  I figured why not make something like it at home to jazz up my usual fajitas that I make.

I bought a grass-fed shoulder roast.  I rubbed it with salt, pepper, cumin, chili powder, and cayenne, then browned it on all sides.  I put it in my slow cooker with a little bit of beef broth.  By little bit, I mean it didn’t even cover the entire bottom.  I deglazed the pan with some water and then poured it into the slow cooker.  I added a lot more chili powder, cumin, and cayenne, as well as more salt (but not a lot, of course).  I let it cook for about 6 hours before shredding it and letting it simmer a little longer (long enough for a leisurely bubble bath!).  I checked the seasoning before cooking the peppers and onions, and continued to let it cook while the peppers and onions were in the pan. 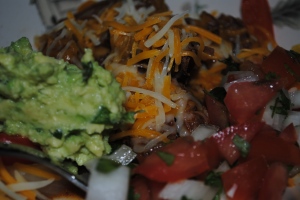 The pico was made before the bubble bath and I had the cilantro and lime juice ready for the guac at the same time.  While the peppers and onions cooked, I cut open the avocados and mashed them into the cilantro and lime juice.  I had some tortilla chips.  I like eating my Barbacoa Bowl with tortilla chips just like I do with taco salad.  The fork is really to just help get the food onto the chip when the food is being stubborn.

Overall, I was pretty pleased with the results.  As usual, hubby didn’t think there was enough salt.

I couldn’t help but think, what if I threw a hot pepper in with it next time?