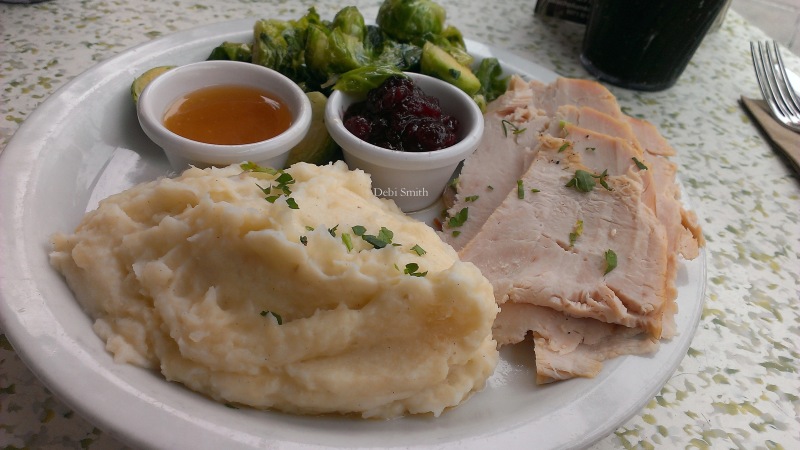 Our last day in San Diego/North County we decided to take it easy and play it by ear. For lunch, we wound up at Tin Leaf Kitchen, not far from our hotel. Chaz found them online and showed me their menu. I questioned the Turkey meal, it said it was gluten-free but was it really? I mean what restaurant makes gluten-free gravy so people with Celiac and NCGS can enjoy it too?

I questioned the woman who took our order to ensure the gravy really was gf. She was patient with me and answered everything with confidence.

Pictured above is the All-Natural Roasted Turkey Breast. Or as I was calling it Thanksgiving dinner. This used to be one of the things I loved to order at diners since turkey, mashed potatoes, gravy, and cranberry sauce (or relish as this is) should be enjoyed more than just one weekend a year. I was stoked (to slip in some of my SoCal past).

They also had a Boylan soda fountain. Not Coca-Cola. Not Pepsi. Boylan. They are sodas made with cane sugar instead of HFCS. I have a difficult time with HFCS as it can send me into an adrenal crash so I save it for the occasional movie-going. I had never heard of them before this and couldn’t decide which one to try because decisions! I ended up with the black cherry and wow. It was so good. Since then we’ve been able to find them at various locations around town – first the long trek to Jungle Jim’s but now closer in our neighborhood Kroger and Fresh Market. I have a stash of the ginger ale for the days I’m nauseated because nausea starts to dissipate before I’m halfway done.

We left the theater, greeted by the moonrise on one side…

…and the sunset on the other.

Two things you need to know about our trip back home before we arrived at Whiskey Cake Kitchen & Bar: 1) Late dinner the night before was a trial at a Denny’s in Nowhere, New Mexico and it was a disaster that included me overhearing our server mocking me from the back and then asking for the manager when she returned to our table to check on us (if you’re going to talk shit about me and don’t want me to know, don’t do it so loud that I can hear it); & 2) We had tried to go elsewhere for lunch but they did everything they could to not serve us…me…saying the only thing they could serve me was the gluten-free bread, plain. All the experiences on our five-week journey had been mostly positive. There were places where “gluten-free” on the menu didn’t really mean gluten-free – shared toasters, shared waffle irons, etc. You get the picture.

Having two horrifying experiences fairly back to back almost wrecked me. Between dressing down the manager rather publicly for being mocked by one of her staff for a medical condition that I didn’t choose to have and then being denied service I was ready for a breakdown. The latter experience is why I stopped using the Find Me Gluten-Free app. The restaurant we attempted to eat at was given good reviews on the app. This was the final sign to me that there are more users using the app that don’t have to be gf and muddying the waters. The other signs over the course of the road trip were the aforementioned places where gluten-free meant shared equipment was used instead of dedicated equipment.

So there we were, on a late sunny afternoon walking into Whiskey Cake when a smiling friendly face welcomed us and Chaz promptly returned the greeting and let the man know that I can’t have gluten.

It was then my shoulders lightened. I didn’t realize I had been carrying the weight of the world on them until I wasn’t anymore.

He seated us, letting us know he’d be our server and informed me of the options, including the gluten-free bread/buns that are made locally. Even when he came back later, he was patient when I asked questions to verify – like are the housemade chips really gluten-free? Are they fried in a dedicated fryer? Yes and yes.

I ordered a Pink Drink (non-alcoholic) because it had guava juice. Who knew guava went so well with grapefruit?  The burger with the aforementioned locally made gf bun was delicious and the homemade chips (dedicated fryer) had just a hint of BBQ seasoning.

I described Whiskey Cake on Instagram as having a country hipster chic vibe. I liked how they used repurposed items for table decor: old bottles for the sugar and sweeteners, old lightbulbs to hold a sprig of rosemary, and cardboard for the coasters. Pretty clever repurposing I think.

I kind of wish we lived in OKC just to go back to this place.

Mom gave these to me when we picked her up from work to take her out to dinner. I with the Raspberry Coconut ones were available for delivery.

One of the places I had my eye on before we even left on the road trip was 2Good2B in Encinitas. My friend and fellow blogger/author T.H. Hernandez told me about them. If you’ve been following me from the beginning (or near it), Theresa and I first met as gluten-free bloggers when she was doing her Gluten-Free Comfort Food blog. We fell out of touch when she stepped away from her blog and when I least expected it, she found me on Twitter as I was working on Family Ties and she was working on The Union. So when she recommended them I knew I had to get there come hell or high water.

On my birthday, we spent the morning at Moonlight Beach before heading over to 2Good2Be to meet a high school classmate for lunch. She was running late so we ate dessert first. When in doubt – or if it’s your birthday – always eat dessert first.

If we lived in Encinitas I would be at 2Good2B daily for the Raspberry Coconut cupcakes. They remind me of Raspberry Zingers and I loved those things. The desserts here are really out of this world, some of the best I’ve had from 100% gluten-free bakeries/restaurants.

Once my friend arrived, we ordered lunch. Somehow when the orders went back to the kitchen, my sandwich got left off and it took a while longer for them to prepare it.

While I loved that they use Terra Chips (one of the few ways for me to enjoy taro chips on the Mainland) and the chicken salad was delicious, the bread left me wanting. It was too dense for a baguette. They should be light and airy inside with a crisp crust. The full bread loaves they had out for sale were all heavy and based on that, my guess was they were all as dense as the baguette.

Don’t let my opinion on the bread deter you, though. There are many healthy lunch options and everything they had behind the glass looked yummy. I would go again to try something different. 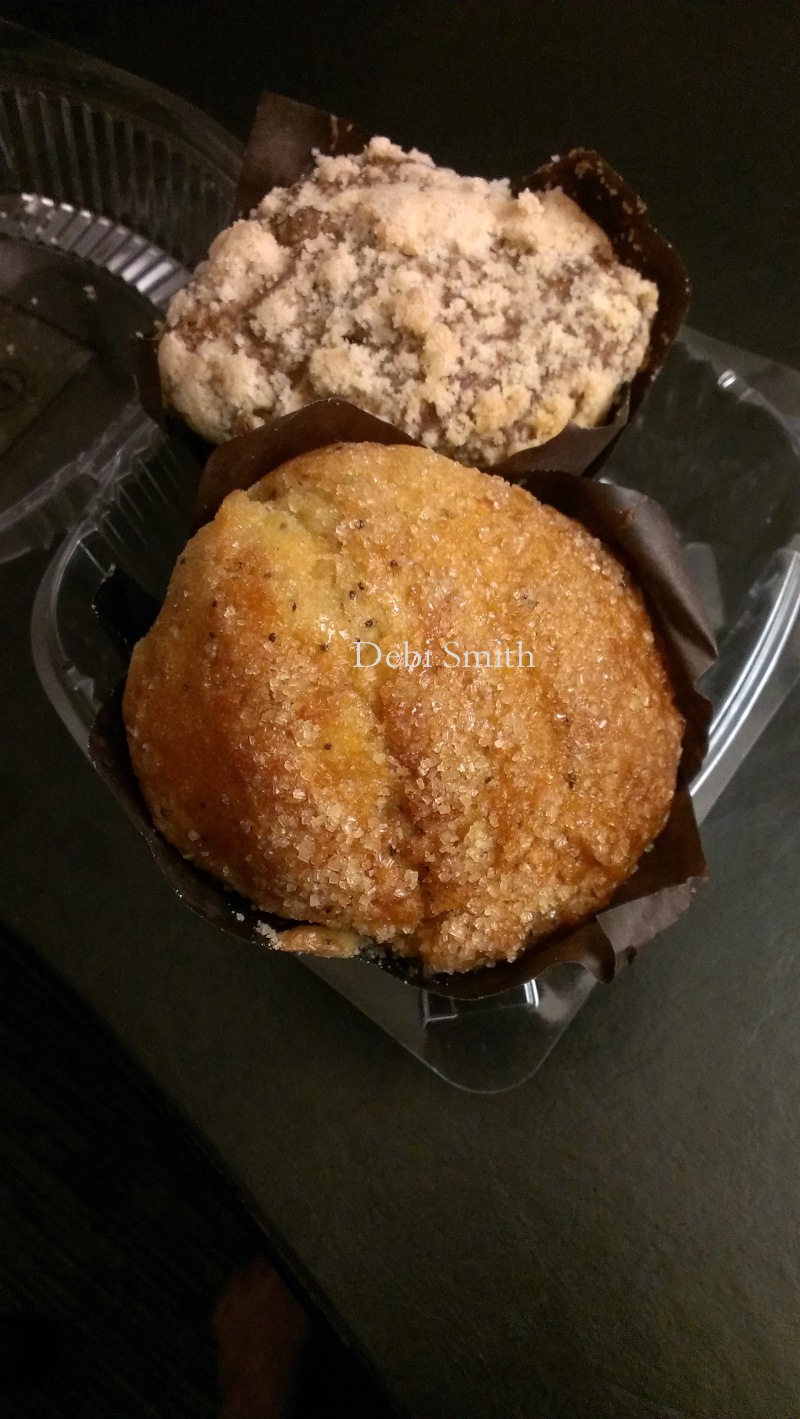 What I did pick up for later were some muffins. Since the cupcakes were light and fluffy, I suspected the muffins would be too and I was right. The Lemon Poppyseed and Blueberry were just as delicious as the cupcakes.

If I could I would order all the muffins and cupcakes to be shipped to me daily. Okay, maybe not daily. Just weekly.