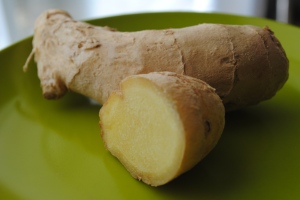 I loved Zingers.  The ones with raspberry.  I could eat almost a whole box in one sitting.  That sugar just drove me to eat “just one more.”  Same thing with Little Debbie Swiss Cake Rolls.  Chaz used to tease me about having a stash.  Well, if I left them in the pantry they’d be gone before I could get one or two.  Residual habit from living with my parents, brother, and sisters.  Junk food would be gone in minutes before I had a chance to get any of it so I didn’t eat much junk food unless I was out with friends.

I’m sure I could concoct some kind of gluten-free Zinger taste-a-like.  Honestly though, I’m not interested in even trying.  The zinger that I’m most interested in these days is ginger.

I love ginger.  The more the better.  I love that it has natural healing properties.  It’s great for nausea, gastrointestinal problems, and sore throats.  Ginger is one of my go-to foods when I’m sick.  I’ll boil it in water to use to make tea.  I’ll boil it with a little meat to make Voo Doo Soup, an ex-roommate’s concoction which does help you feel better.  I have some ginger candy that I use when my throat hurts.  It’s good for the heart and has some anti-inflammatory properties, as well. 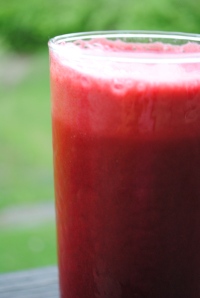 I love to add it when I’m juicing.  It gives me that zing in the morning that perks me right up.  It also adds a little spice to the veggie and fruit mix, especially if I wind up a little too heavy on the veggies.  I tend to us a lot of ginger if I use it in juicing so it is potent.  If you aren’t that big of a ginger fan, use less if you try this out.

1 beet with stems and leaves

Wash the beet, carrots, ginger and grapes well.  Do not peel the beets or carrots.  If your beet, apple, and peeled orange are too big for your juicer’s tube, quarter them before juicing.  Place ingredients into the tube and juice.  It took 3 fillings of the tube to get everything juiced.  This yielded slightly more than 16 ounces.  You can vary the fruits and veggies.  I will sometimes add berries when I have fresh berries.

I discovered yoga almost 10 years ago.  September 11, 2001, to be exact.  I was at a case management conference with my co-workers.  I was with one of them waiting for our first session to start.  The instructor walked in and informed us that terrorists took over planes and flew them into the Twin Towers.  It was just after 9am Eastern time.  He used the announcement to segue into the topic for the session, Gangs.

The information about the terrorists didn’t really sink in until later when the organizers of the conference ended the session early and called everyone to gather outside the ballroom.  The hotel set up several TVs so we could watch news coverage.  Another co-worker was trying to reach her brother in Manhattan with no luck.  That is when it really hit.

We were served an early lunch and the conference was cancelled.  My co-worker got a hold of her brother before we left and our boss told us to go ahead and go home because no one was focused on work at the office.  The conference was in-town and the hotel was about a mile from my apartment so I didn’t have far to go.  I sat in front of the TV watching the news for a long time.  Crying.  The enormity of it overwhelmed me as I thought about the lives lost, the loved ones left behind to grieve, and the bravery of the passengers of Flight 93 who refused to go down without fighting back.  I had to get my mind off of it.

I started flipping stations and stopped on a yoga program with a particularly excitable instructor singing along with the music playing and saying things like, “If you hate me right now, it means you’re doing it right.”  I knew what yoga was, but I had never done it before.  What I loved was there were students of all ability levels.  I could look at the least flexible of them and feel like I was doing just fine.

I had to tape some of his shows because sometimes it would be on and sometimes it wouldn’t.  Plus, it was on at 6am.  I wasn’t fond of waking up that early for yoga.  I could wake up later and do it without all the commercial breaks.  Or I could do it after work.  I did find that if I did it in the morning, I was more awake and alert throughout the day.  No sleepies.  No, “When is nap time?”

So, yoga has been an on and off thing for me since then.  Until now.  Two months ago my new doctor told me at my first visit that she wanted me doing more yoga.  That was all the motivation I needed to make sure I was doing more of it.  We don’t have the VCR hooked up so I can’t use my tape of Inhale shows, but I have a collection of Gaiam DVDs that I use.  I never do the same routine two days in a row and I do about 20 minutes in the morning on the days I work even if I work later.  Again, I’m more alert when I do it before work even if I’m sleep deprived.  Who needs caffeine after a good yoga session?  Not me!  I’m still not very flexible but I don’t care.  It’s having a positive effect on my body and mind.

One day, I hope Steve Ross will come out with some DVDs.  I do love his playful demeanor which makes it so much more fun.

If you happen to be in Louisville, check out my friend, Jodie, at Supreme Peace Yoga.  I never got a chance to do yoga with her before moving and hope to drive down one day to spend a little yoga time with her. 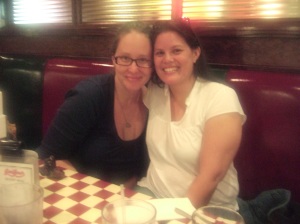 Me and the phenomenal Stick. Photo effects are thanks to her son. Kinda makes for a cool all natural blur.

Two remarkable chromosomes determine whether we are male or female.  Most of us are either XX or XY.  Some people are born with an extra chromosome.

It’s amazing to look back at Western history and see how far women have come in their place in society.  We still have a ways to go as far as true equality is concerned, but that will come with time.

We are still having to advocate heavily for ourselves as we go to doctor after doctor seeking to figure out what ails us only to be told, “It’s all in your head.”  I’ve never had a doctor tell me that directly, but the partner of my former doctor clearly wanted to say it when I was in for the 4th time in less than a month trying to figure out why the sinus turned respiratory infection wouldn’t get any better after 2 rounds of antibiotics.   “You just started the 2nd round 2 days ago.  I don’t think you’ve given it enough time.”  Yes, I am not a doctor.  I know my body.  I know how antibiotics work and how I feel when I take them.  When I see no difference after 48 hours and I’m having intermittent fevers, I know something is rotten in Denmark.  I was so upset, frustrated, and felt he was just minutes away from telling me, “It’s all in your head.”  I burst into tears in front of him and his PA.  Well that got his attention.   Nothing like a patient getting extremely emotional, right?  Well, that led to some other questions about my mental status.  I nearly yelled, “I’ve been sick for 3 weeks and I’m not getting any better.  I just want to be well!”  I didn’t yell, but I managed to get it out in the midst of my blubbering.  Thankfully, one of those fevers hit me while I was still there and I got real pale.  He took me seriously after his PA confirmed my skin was clammy.  Thank goodness I only had to put up with Dr. Wright’s partners when he was on vacation or it was a Friday and I was really sick.  He had another partner whom I refused to see again after he wouldn’t listen to me.  He had that I’m-the-doctor-so-of-course-I’m-right-and-you’re-wrong attitudes.  When the meds he gave me made me worse I wanted to call him and tell him, “I told you so.”  He’s lucky I’m not that kind of person.

In my journey to recover from my hypothyroid’s effects on my health and then gluten’s effects, I’ve been fortunate that I’ve had doctors treating me that really listen and value my input.  It’s a struggle in Western medicine to get doctor’s to take us seriously.  Especially when there are doctor’s out there who forget that their patients know their body the best.

If you’re having problems with your doctor and there are other doctor’s out there, fire your doctor.  You aren’t legally obligated to keep seeing a doctor if they aren’t giving you good service.  If you had bad service at a restaurant, car dealership, or store would you go back?  I don’t.  We deserve exemplary service from doctors.  We go to them and put our lives in their hands.  We trust them to help us get better.   There is no reason to put up with doctors that treat us like we’re lunatics just because we’re women and they can’t figure out what ails us.  I’d much rather hear, “I don’t know” from them than, “It’s all in your head.”