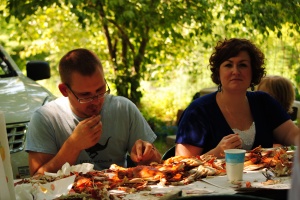 Matt and Stacy chow down on some crab before the presentation

I mentioned Eat Like A Dinosaur by The Paleo Parents, Stacy and Matt, three posts ago and the post before that.  My blogger friends were in an uproar about a month before the cookbook was released.  By uproar, I mean Olympic style cheering.  I could not wait to get my hands on it.  Then, in the midst of discussing our gluten-free retreat with fellow blogger friends, our host, Shirley (gluten-free easily), told us that Stacy and Matt would be the special guests at her King George Gluten Intolerance Group that weekend.  I was already excited that I was going to get a peek into what a good support group runs like for people like us.  I do not attend the Celiac Support Group here in town because through email interactions I came to the conclusion that the leader and some members would not be a good support for me.   So, add the fact that Stacy and Matt would be there and my excitement doubled.

They never would have known my excitement though.  I try to play it cool when in the presence of greatness.  Oh, Steve Perry just held the door open for my best friend’s mom on our way in the diner for breakfast?  No biggie.  I’m 3 seats away from the stage that Jason Scott Lee is performing on and the stage ends at the first row?  Happens every day.   Lea Salonga is on stage playing Eponine?  Puh-leeeze.  Okay, that one I admit my friend and I were grabbing each others hands and swatting each other with excitement when she made her entrance.  Big theater.  Darkness.  No one saw but my friend’s family and another friend we were with (who made sure we sat next to each other knowing what our reaction would be).  Come on, it was Lea Salonga.  You would’ve done the same thing.  Right? 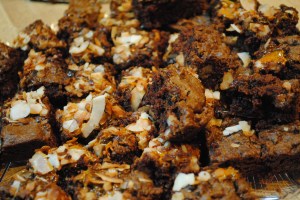 Paleo Brownies made by The Paleo Parents. We couldn’t stop eating them.

Matt and Stacy arrived at Shirley’s house with their 3 adorable boys while Heather and I were out for a walk.  By adorable I mean, they are the cutest darn kids even when they aren’t happy and are letting you know it.  We got to nibble on the sides of the Samoa Brownies they brought as Stacy was cutting them up.  We really tore into them at the picnic.

Stacy did the talking during the presentation while Matt watched over the kids.  It didn’t stop Finian from coming over and letting Stacy know he wasn’t happy about something.  I think he had something in his shoe.  She mirrored his tone without skipping a beat and asked, “What are we going to do about it?”  This was where I really fell in love with their parenting.  I worked with so many kids in my years pre-mental health work and during mental health career.  I witnessed some spectacularly poor parenting skills.  I still see a lot of it working in retail now.  There was no scolding that he interrupted her presentation.  No yelling.  No telling him to go find his dad or to go away.  She simply acknowledged that his problem was important and cued him to problem solve on his own.  That simple exchange stuck with me (in case you couldn’t already tell).  Maybe it’s because I used that same technique on so many kids throughout the years and it was a joy to see a parent actually using it.

Stacy shared their oldest son’s story.  Never mind the fact that she and Matt lost a combined 200 plus pounds together simply by changing what they ate.  Taking out the processed and refined foods and eating only whole foods.  Cole is the star of the family’s change.  He went from having behavioral problems in pre-school, which included talk of being kicked out of the school, to being a star pupil.  Again, this is all from making a shift in what he was eating.

I can’t tell you how much I would have loved to have been able to suggest eating habit changes to my former clients and their parents.  If it meant not having to go into school meetings with teachers and administrators and reminding them that my client is too young for an ADHD diagnosis and medication.  Seriously, pre-school teachers wanted my 4-year-old (at the time) client on Ritalin.  Now, a diet change wouldn’t have helped change everything for the little guy.  He suffered from PTSD, having been abused and neglected (along with his siblings) by his parents.  Nor would it have for all the other kids I worked with, but I can’t help but think how much it might have helped them to cut out all the processed junk they were all eating.  Working with the teens in the group home my last year of that job, I was actually able to help start them making better choices in what food they chose when I was the one taking them to the grocery store.

Oh my, I’ve gone on and on and I haven’t even gotten to the best part.  Eat Like A Dinosaur.    If you clicked on the link above from three posts ago, you’ll see some of the food I made from the cookbook up until then.  Since then, I’ve also made the Black Olive Tapenade, which was wonderful but I accidentally deleted the picture thinking I was only deleting thunderstorm pictures I was taking in an attempt to get a shot of lightning (the things we do when playing with our cameras).

It may not seem exciting to you, but I finally used my dehydrator!  I made kale chips first.  Not using the recipe from the book, but my own inspired by the book.  I also made their fantastic Teriyaki Beef Jerky.  It was giving me ideas just putting it in the dehydrator.  Once the beef jerky is gone, I’m going to experiment with the idea.  I love being inspired by good recipes!

I made the 50/50 Burgers last week.  After finally reading Eat Like A Dinosaur, I learned that Elana’s boys love them.  How do I know that?  She wrote the Forward for the cookbook!   Instead of putting the burgers between a bun, I used it as the hamburger patty for my Hamburger Salad.  I now know why they are a favorite.  Bacon just makes everything better!  Plus, I love that the recipe calls for cumin.  I always put cumin in my burgers.  They just taste better with cumin.

While Eat Like A Dinosaur is geared for families with children, you don’t have to have children to enjoy the cookbook.  I meet so many people who don’t know how to cook or don’t like to cook.  Anyone can learn to cook with the recipes in this cookbook.  There are Post-It-like notes on the recipes and an easy key for what major allergens are used in the recipe.  Since this is a paleo cookbook, there is no dairy, grains, or legumes used in the recipes.  There are tips on how to get your young children involved in helping and the recipes are easy to follow and would be easy for them to use as they get older and can start cooking on their own or with supervision.  There is also a big section of hints in the back of the book.  Reframing school lunches and getting you to think outside the brown paper bag.  Making your own fruit and nut bars.  Making dinners that are fun and different.  Hitting yard sales and thrift stores for things like kitchen gadgets (if you have food allergies or intolerences, there are some kitchen items you should not be buying second-hand).  Gardening and picking your own produce from farms in that business.

The best part of Eat Like A Dinosaur is Cole’s story told from his point of view as a children’s book.  Totally worth it it just for that part alone.

According to Shirley and Heather, I make faces like this when trying something new before declaring it to be amazing. It’s better than the face I made when I tried natto for the first and last time. (Photo credit: Shirley Braden)

I met an amazing family and some pretty amazing support group members.  See that woman in the picture with me?  That’s Teri.  She just started her own blog Real Food Geek.  Check her out.  She has a pretty amazing story!  I enjoyed talking with her at the picnic and can’t wait to see more posts from her.

What?  You haven’t ordered Eat Like A Dinosaur yet?