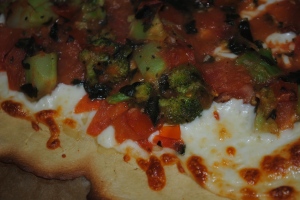 The gluten-free community was buzzing a week ago when Domino’s announced their new gluten-free pizza.  By buzzing, I mean swarm of angry killer bees.  I pretty much lost all productivity once I read the press release.

President and CEO, J. Patrick Doyle is quoted in the pres release,  “The prevalence of gluten sensitivity has become a real issue with significant impact on consumer choice, and we want to be a part of the solution. Now, the whole group can enjoy Domino’s with the addition of our new Gluten Free Crust.”

Next in the release, “While Domino’s new Gluten Free Crust is appropriate for those with mild gluten sensitivity, Domino’s and the NFCA do not recommend it for those with celiac disease. Domino’s and the NFCA found that while the crust is certified as gluten-free, current store operations at Domino’s cannot guarantee that each handcrafted pizza will be completely free from gluten.” (just a quote from the press release, not a quote from someone)

My blood was boiling.  Then I popped when I read this next part.

“The NFCA is thrilled that Domino’s Pizza has developed a product that will improve the quality of life for many of the estimated 18 million Americans who are gluten sensitive,” said Alice Bast, NFCA founder and president. “Not only is Domino’s Gluten Free Crust a huge win for much of the gluten-free community who can now get pizza delivered to their door, it’s also delicious. Customers aren’t going to believe they’re eating a pizza made on a gluten-free crust when they try it. And the variety of fresh toppings that are available is a giant leap ahead.”

I’m not a doctor.  I’m not a health expert.  I’m just someone with a chronic illness managed by a simple diet change who happens to be educated and continues to stay educated.  My late sensei would tell us in class all the time, “When you think you know it all, you know nothing.”  This is why I keep reading.  I know if I stop and feel like I know everything there is to know about Celiac and gluten intolerance, I really know nothing.

I know that all of us dealing with gluten intolerance, Celiac or not, react to gluten.  Our different diagnoses does not matter.  It may do different things to our bodies.  It may work silently.  In the end, we all still react to gluten.  It is a disservice in the press release that the attempt is made to try to say that the  pizza is for those with mild gluten sensitivity.  It is a disservice that Ms. Bast calls this pizza a “huge win.”   There is no win when Domino’s is not changing their prep procedures to ensure there is no cross-contact occurring in the kitchens where the pizzas are made.

My gluten-full friends were excited for me to have a new option.  However, when I explained that only the ingredients are gluten-free, but the prep would be the same as regular pizzas, even they asked, “How can it truly be gluten-free?”  I did not have to lead them to ask that question.  They all asked it on their own.  I either did a great job educating my friends or I have really smart friends.  Or both.  It amazes me that they, who are not living gluten-free, can come to this conclusion, yet a national food chain and a national foundation are praising this pizza knowing it not to be safe for all of us.

This pisses me off.

Example: I was reading comments from people who already tried the pizza and said they had no reaction.  Or saying the gluten-free person in their family has no reaction to cross-contact.  This kind of mixed message marketing saying it’s okay for those with mild gluten sensitivity, but not those with Celiac, only feeds into the misconception that no reaction = no problem with the gluten present.  It also does nothing to help those new to living gluten-free or those that do not stay educated on what gluten does to us.  Or those living on the banks of Denial.

If you listened to the Gluten-free Radio, hosted by Jules Gluten-Free, last week Thursday with Ms. Bast as the guest.  I never realized how increasingly angry I could get over an hour.  I shouted out a few things here and there.  Chaz would walk into the room and just shake his head.   I really can’t comment on specifics from the show or The Hulk might show up as I’m typing.  Then all you’ll see before The Hulk hits “Publish” is IYLGFLJHFIGLUYO(YTgFHBKJAGSLGKJHSLGLSHG.  We don’t want that, do we?  However, Ms. Bast did point out that their involvement and their Amber designation was to clear up confusion.  Yet, everything seems to get more and more confusing.

Ms. Bast put out this statement last week about the NFCA involvement.  She writes: “NFCA consulted with Domino’s on this launch and after reviewing operational procedures, we decided that we could not recommend this product for those with celiac disease. We urge those with non-celiac gluten sensitivity to exercise judgment in deciding whether to order this pizza.”  Wait.  Wasn’t she quoted in the Domino’s press release as saying this is a “huge win for the gluten-free community” earlier in the week?  And shouldn’t she know that gluten is a problem for all of us regardless of diagnosis?

One caller to the radio show pointed out that the NFCA’s involvement and Amber designation through their GREAT Kitchens program is seen by many in the gluten-free community as an endorsement of Domino’s and the gluten-free pizza.  I agree with that caller.  Think of a yellow light.  There is a lot of gray area there.  Proceed with caution. Slow down and stop.  Gun it and go.  Of course they mean for us to proceed with caution.   But, everyone has their own interpretation of a yellow light.  It frightens me that those new to the gluten-free diet or those who don’t stay educated would interpret the Amber as go for it.

If the NFCA wants the gluten-free community to get anything from their GREAT Kitchens program, it needs to be clear cut.  I tweeted, “I think NFCA should have a Red designation for their GREAT Kitchens program” while listening to Jules interview Ms. Bast.  There is no gray area or question about red lights.  You stop.  Period.  If a restaurant has gone to the NFCA because they want to offer gluten-free options for their guests, but will not change their operational procedures to ensure food safety for us, we shouldn’t be going near them.  Plain and simple.  Yes, these places know what they are doing and are ensuring food safety.  No, they know what they should be doing but aren’t doing it.

Dr. Alessio Fasano, Director of the Center for Celiac Research at University of Maryland,  released a statement in regards to Domino’s gluten-free pizza which made it clear we shouldn’t be eating it.

While the development of safe gluten-free products and safe dining establishments is always a welcome advance, we do not have the confidence that this product meets the safety standards we recommend for our patients. The introduction of cross contamination from a large chain like Domino’s represents a threat to our patients affected by gluten-related disorders, including celiac disease, gluten sensitivity, dermatitis herpetiformis (a skin condition), wheat allergy and gluten ataxia. As an international celiac research center with expertise in gluten-related disorders, we believe that individuals who have been diagnosed with a gluten-related disorder should NOT consume this product.

Everyone gets to make their own choices in what they eat, even when it comes to living a life with food allergies/intolerances.  If you have contemplated the Domino’s gluten-free pizza, I urge you to not try it.  Chuck E. Cheese is working on bringing their new gluten-free pizza to the market, but is currently only available in some Minnesota locations.  Naked Pizza also has a gluten-free pizza option and they are a company that uses sustainable resources as much as possible.

If you are in agreement about the NFCA’s Amber designation, 1 in 133 started a petition to get rid of it.  Please sign it and show your support!

*Note: If you are in the restaurant industry and want to provide a safe gluten-free or even allergy-free experience for diners in your establishment, the NFCA is not the only resource.  Allergy Chefs, Inc. has a training sessions conducted by Chef Joel Schaefer.  Chef Joel and his wife worked for Walt Disney World Resort for many years and they are the persons to thank for Disney bringing allergy-free dining experience for us.  Chef Joel is the one from whom I picked up the term “cross-contact.”  As he says, cross-contamination refers to bacteria that can be killed.  You can’t kill foods that are allergens.