The grill was used nearly every night while I was home.

This is Celiac Awareness Month and while I have always said I have self-diagnosed gluten intolerance, I do believe I have Celiac instead.  The more reading I do and the more I see the symptoms lined up with my own, they fit more with Celiac, than non-Celiac gluten intolerance.  The main distinguishing symptom being diagnosed with another autoimmune disorder.  I lay wide awake last night, attempting to sleep but mentally writing out this blog post.  Then, I woke up to this post about a scam geared towards people with Celiac Disease.  Thanks to Denise O’Deen SanFilippo for sharing Gluten Dude’s emphatic post.  And thanks to Gluten Dude for sharing about the false claims of the product, twice.

There is nothing those of us with Celiac or non-Celiac gluten-intolerance, or any autoimmune disorder, or food intolerance/allergy, want more than to not be afflicted.  It takes us or our loved ones out of the realm of normalcyand into the realm of the unknown.  Okay, me being normal was never normal to begin with.  You get my drift.  Handling social situations gets easier and easier, especially when I can plan for them.  Traveling home last Fall for my cousin’s wedding was easier than I thought it would be.  Traveling home last month and being with family nearly 24/7, not so easy. 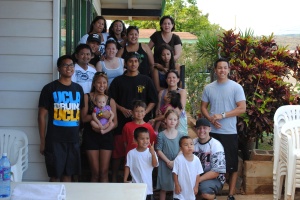 Me with my siblings, some of my cousins, and my nieces and nephews.

I have a rather large family when you add in all the grandmas, grandpas, aunties, uncles, and cousins in the entire extended family.  Not just my Dad’s brothers and sisters and their kids, but my Dad’s aunties, uncles, cousins, and their kids.  After almost 14 years of marriage, Chaz still says something like, “How the hell should I know? Your family is HUGE!” when I’m trying to get him to remember who is who when I talk about them.  I grew up with my aunties, uncles, and Dad’s cousins, whom are also aunties and uncles to me.  I babysat some of my cousins when they were little.  We are close which means we stand closer together than most people would.  And, we steal food off each other’s plates.  Well, maybe steal is too harsh.  We share liberally.  It’s nothing for one of the kids to ask for food off your plate.  When Cuz Mooch was a toddler, she’d walk up to you with her mouth open. 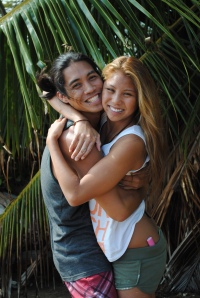 I had to be on my guard constantly.  I had my own snacks.  Dried fruit.  Trail mix.  If I happened to pull some out in the afternoon because I needed something to get me through until dinner, someone wanted some.  I couldn’t just let them stick their hands in my food like I used to.  I had to either pull out the dried fruit for them or pour the trail mix into their hand.  Some of them (*ahem* Dad) gave me momentary funny looks, that disappeared as fast as it appeared.  But I noticed.  A few asked and I simply said, “I don’t know where your hand was.”  That was that.

Cuz Mooch’s boyfriend, Grill Master (I only call him that because he manned the grill every night they were there), did a great job helping out and even problem solving grilling me a steak on the grill, but keeping cross-contact from occurring.  I already knew foil would need to be laid out on the grill for my steak, but when it came to using different utensils, instead of using two sets of tongs, he grilled my steak first so it wouldn’t touch the others until mine was already off the grill.  He’s genius!  Or I was just really tired and jet lagged.  Or both.  I thanked him multiple times for that.  I was able to squirrel the leftovers away to a covered plate in the fridge and put my name on the foil so no one would take it.

It would be nice to not be afflicted and not have to be vigilant of what is going on when I’m with my family in order to prevent an accidental glutening.  But, nothing I can take will make my body accept gluten as a food.  It’s not fun to be on my guard as much as I was, but I did it and I communicated my needs when it came to communal food.  No gluten in my diet means a healthier and happier Debi.  I think most of you would rather have a happy Debi than a miserable Debi any day.

I wasn’t missing a lot of food that I couldn’t have that others were eating until it came to Grill Master putting some kal-bi (Korean short ribs) on the grill.  I love me some kal-bi.  I love it so much that I had to make my gluten-free kal-biversion when I got back to Cincinnati.

I normally make my version of the Korean bean sprout and cabbage side dishes when I make kal-bi.  I love the sprouts, but along with them, I wanted something else.  Eggplant.  I came up with this and even Chaz was happy with it.  I think “really like” was his word choice.

Heat a wok or large skillet to medium.  While it warms up, mix together the gf tamari and mirin.  Once the wok/skillet is heated, drizzle a little (no more than 2 teaspoons) toasted sesame oil and let it warm.  Add the eggplant and stir fry until eggplant is almost done.  Add your sauce once the eggplant is almost done and make sure to continue to stir while adding the sauce.  You will not use all the sauce.  Use just enough to get the eggplant coated well.  Refrigerate the leftover sauce.  Once your eggplant is fork tender, take it off the heat.  You can serve this warm or at room temperature.