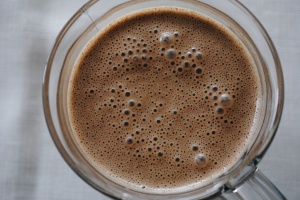 I’ve been wanting to adopt Maggie Savage, She Let Them Eat Cake, for a few months now.  We both have a love of chocolate and peanut butter.  Who doesn’t?  I mean, other than those of you reading this that have nut allergies.  We both also love to use raw cacao powder.  Heavenly stuff.

Of course I had to make her Peanut Butter & Chocolate Smoothie.  Aside from being a fan of chocolate and peanut butter, I love using hemp protein powder in my smoothies, as well as adding cinnamon (or even garam masala).  Maggie uses both of those ingredients in this smoothie.  Delicious!  Mine ended up with some chunks in it (I think my blender is about to die), but it didn’t stop me from drinking this right up.

I finally got to make her Chocolate fRAWstie.  I’ve been wanting to make it since she posted it for April In The Raw.  Why such a long wait to make it?  So many recipes to make, not enough time!  I made it on a rather warm afternoon and enjoyed it with a spoon to help keep myself cool.  It’s really like a treat that you can’t get anywhere but your own kitchen.  So much healthier than anything you get elsewhere, too.  It’s loaded with protein and iron.  Well, as long as you use raw cacao powder and not the chocolate powder that you grew up using because it’s what your mother had in the pantry.  I

Then there was her Caesarish Salad Dressing.  I had been thinking about Caesar Salad when she came out with this recipe.  I find if I’m thinking of something and another blogger comes out with a recipe for it, that means I have to make it.  Chicken Caesar Salad went on the menu board!   Her recipe was a great reminder to me about the use of nutritional yeast.  I was first introduced to nutritional yeast quite a few years back when Chaz was traveling a lot for work to different major cities in the South and Mid-West.  He was in Atlanta frequently and his clients would take him to The Grit.  He loved the food so much, he bought their cookbook and made a few things from it for me.  This means, I’ll be dragging out the cookbook more.  I did use brewer’s yeast instead of nutritional yeast for the dressing because I have a bunch of it that I need to use up.  The only difference I find between the two is that brewer’s yeast has a ton of amino acids that the nutritional yeast doesn’t have and all the same vitamins.  In the middle of making the dressing, I discovered I didn’t have capers.  I thought I did.  Nothing like having everything else in the blender and discovering you’re missing the last ingredient.  I could have run to the store (pretty much a 2 minute drive), but I was trying to get dinner fixed before I had to get ready and head to work.  So, I just gave the blender a whirl and hoped for the best.  The dressing was edible, but

the capers would have balanced out the cheesiness of the yeast and the sweetness of the honey I used.  Yes, I will be making this again.  Perhaps a Shrimp Caesarish Salad next time.

Blueberry Buckle.  Blueberry.  BLUEBERRY!   I love blueberries.  Well, I love berries period.  I happened to have some fresh blueberries on hand.  It was really easy to put together and smelled wonderful while baking in the oven.  I had a hard time waiting for it to cool enough to handle to get out of the springform pan for cutting up.  It’s a great marriage of blueberries and coconut oil.  The taste of the coconut oil with the texture of the buckle kept reminding me of a Filipino dessert I grew up eating, but I can’t put my finger on which one it was.  There are a lot of Filipino desserts with coconut in them!   I admit I ate the whole thing myself in under a week.  I had it out on the dining room table in the cake server, but Chaz didn’t try it.  I was eating it for breakfast, snack, and dessert.  Yes, that means I was eating more than 1 piece per day.  It’s good stuff!

Lastly, Classic Chocolate Chip Cookies (With A Twist).  Sometimes I feel bad that I bake all kinds of stuff that Chaz doesn’t want to try or ends up not liking.  Then I remember all the times he eats stuff I can’t have and I figure we’re even Steven.

I hadn’t baked cookies in a while and I really wanted to make these cookies when she first posted the recipe, but didn’t have time.  Plus, I was still recovering from sugar/baked goods overload from the Expo.  It’s funny that my blender didn’t want to make things nice and smooth for me and then my mini-prep wouldn’t make the secret twist ingredient in the cookies smooth.  I was tiring of opening it up and scraping down the sides.  So, I just used my immersion blender to cream the coconut oil and raw local honey.  Then, added the ingredient and continued to blend it with the immersion blender.  I wound up making different sized cookies.  The first pan I dropped them smaller than the second pan.  By the time I got to the second pan I realized I would have enough for a third pan and I didn’t have a third one prepped.  Call me impatient.  The smaller ones set better than the bigger ones.  Of course.   But, they were all soft and chewy.  I used the Enjoy Life mini chocolate chips and forgot about the sugar content in them until I ate the first cookie.  It was so sweet I had to drink an entire glass of water.  Next time I’ll use my usual dark chocolate chunks to cut down the sugary sweetness.  Chaz seems to like them enough to eat more than one.

Maggie has a lot more recipes I would have loved to make for this, but I can only handle so much baked goods at one time in the kitchen.   Instead, I’ll just make them in the future and then rave about them on Twitter and Facebook! 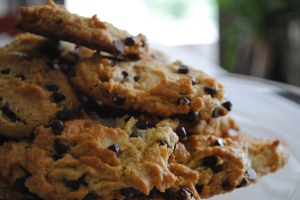 I’m so glad that I was able to finally take the time to make some of Maggie’s wonderful recipes.  I’m also glad I was able to spend some time with her at the Expo!