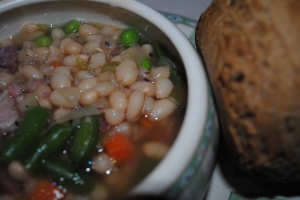 My memories of my mother making Navy Bean Soup are of the soup simply being the beans and hamhock.  I could be wrong though.  I don’t have many clear memories of my mother cooking, except for the disasters and the stuff I didn’t like.  Like beets and peas.  Or that chicken she fixed in the electric skillet and it turned out looking electric yellow.  Gross.  I had to clean that skillet, too.  Even grosser.   It was probably a good thing that I took over the cooking when I was a teenager.  I do have a memory of making lumpia with her, which she never fixed again because it “took too much time to make.”   The same with making sushi.  The one thing I do remember her making more than once that I loved was adobo.  She actually made that in the pressure cooker since it cooked faster.

So, whenever I make Navy Bean Soup, I just throw whatever into the pot.  Much like other soups I make.  I really wanted to bump up the veggies in this one, but I knew I’d be pressed for time.  I chose to use some frozen veggies which I added near the end of the cooking time and they tasted just fine.

I thought I was going to have more leftovers than I actually did.  Truth is, I think we enjoyed it so much that we ate a little more than we normally would.

Add the first 6 ingredients to a pot or a slow cooker and simmer.  Once the hamhock starts falling off the bone, shred it off the bone and remove the bone.  Remove the bay leaves and season with salt and pepper.  Add the frozen vegetables.  Simmer for about 10 more minutes.  Serve with gluten-free or gluten-full bread, depending on your diet.