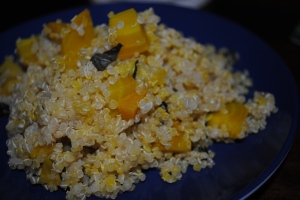 It always starts with a thought, doesn’t it?  That little idea that sparks the desire to experiment.  “I like this and this.  I wonder how it would taste together.”  That’s how it starts with me at least.  This particular thought came to me while driving home from the grocery store a couple of weeks ago.  Of course it was after I left the store.  It would make too much sense for me to have it in the store where I could actually purchase the items needed for the experiment.  I could have turned around and gone back for it, but having the thought after the fact gave me time to plan.

So the thought started with beets.  I saw some lovely beets in the grocery and realized I hadn’t fixed beets in a while.  Then I thought of a bulgar wheat recipe from one of The South Beach Diet cookbooks.  It’s a delicious side with chopped tomatoes, cucumbers, and mint.  Bulgar wheat is out of the question in recipes so I thought, what about quinoa?  Then, what if I used some citrus and beets in the recipe?  Hmmmmm…

So, I mulled this over for a bit and finally put it on the menu this week to go along with some Slow Cooker Citrus Fish.  I chose golden beets simply because this was an experiment and I didn’t want the purplishness of beets to bleed onto everything.  Yet.

The result was tasty and clean.  The only thing I would do to improve upon it is letting the quinoa cool completely.  If you look closely at the picture, the heat from the quinoa wilted the mint, which in turn killed a little of the mint flavor.  I did cook it ahead of time, but did not put it in the fridge or keep turning it and fanning it to cool it down.  Lesson learned.

Mix all ingredients in a bowl and enjoy.