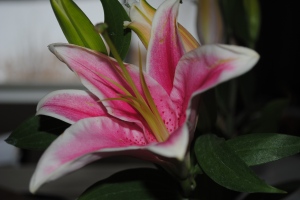 Lilies from my husband

Him: “Screw you.  When have I ever gotten you flowers because I did something?”

Me: “Never.  But you rarely get me flowers when it’s not a special occasion either.”

And I messed with him a little more just because he rarely brings me flowers outside of Valentine’s, anniversary, and birthday.  Not that I want flowers all the time.  It’s more the thought behind the flowers.  Besides, they make good decor!

Christmas trees went on clearance at work last Sunday.  I really didn’t have time that day to check out what was left that day.  So, Tuesday, I went in a tad early to get a few things and see if any tall lit trees were left.  To my surprise there were several 7 1/2 foot trees pre-lit left.  How exciting!  Since moving to our new place, I’ve thought about replacing our little 4 foot tree.  It served its purpose while we lived in smaller apartments.  Our new place has high ceilings and the living room is the largest living room we’ve had.  That 4 footer would have looked a bit Charlie Brown-ish.  Clearance price was 50%.  Add another 10% off for my team member discount, plus another 5% for using my Red Card.  Yes, I got an amazing deal on the tree.  A better deal would have been to buy one of the display trees at 75% off.  Mess with taking it down and disassembling it before checking out?  I don’t think so.  Maybe if I didn’t have to work that night.  I still got a good deal.  It even motivated me to make room for it the next day (read as, shoving it in the corner for now because it took up too much room in the walkway where I really wanted to put it).

Cheesing with Chocolate Covered Macadamia Nuts from Auntie A

I lucked out and was only scheduled for 4 1/2 hours on Christmas Eve.  And, I wasn’t closing.  Those 4 1/2 hours were still stressful enough to exacerbate a migraine I had since the day before and have me nauseous.  I knew it was all stress since the nausea went away as I drove home and my migraine finally abated after a while.  While I was at work, my husband did some dinner prep for me.  I made turkey soup with leftover turkey I still had in the freezer from Thanksgiving and some of the turkey broth I made from the Thanksgiving turkey.

We opened presents while the soup simmered.  We got a beautiful sushi ornament from Messa and a cute piggy ornament from Mom.  Mom also made us each an apron.  Mine is so cool it’s reversible!  She also sent us a little whisk (great for whisking up a small bowl of dressing or an egg) with a little piggy as the handle and a set of plastic measuring cups and spoons that are magnetized so they stay together in the drawer.  Messa also made me a beautiful necklace.  Can’t wait to wear it somewhere.  Auntie A & Uncle A sent us treats from back home – a few boxes of chocolate covered macadamia nuts and a big container of chocolate covered kake mochi (rice crackers).  Now that’s one thing I miss being gluten free is the kake mochi.  I used to eat it with my popcorn all the time.  Even though it’s made from rice, it’s covered in soy sauce, which means covered in wheat.  I believe my husband is enjoying it for me though.  He even took some in to share with his co-workers today.  My husband surprised me with a canning pot, utensils, and a canning book by Ball.  I asked if he was trying to tell me something.  “Get in the kitchen and cook me something, woman!”  He got a bit of stink eye for that comment.  But, I really appreciate the gift because I’ve been wanting to can, but haven’t had the tools to do it.  My best friend even put together a video for me earlier this year.  She was going to give me a lesson in person when we were visiting last year, but things got a little crazy.  She’s a bit of a canning guru and has been since college.  My husband also got me 2 of Jamie Oliver’s cookbooks – Food Revolution and Jamie Cooks at Home, as well as The Spunky Coconut’s Grain-free Baked Goods and Desserts cookbook.  The presents weren’t all about food though.  I got some CD’s (Depeche Mode and Michael W. Smith) and DVDs.  Witchblade marathon anyone?

After dinner on Christmas Eve, I made a flourless pumpkin pie and flourless peanut butter cookies to take with us to Louisville for dessert Christmas day.   The pumpkin pie recipe was in the holiday issue of Living Without this year.  There was a little gf flour in the recipe that was supposed to settle to the bottom and form a small crust while baking.  No such luck on mine.  And forget taking pictures.  It was a mess to just get a piece out.  Plus, I wasn’t thrilled with the taste.  Too much bourbon, too much cloves.  Everything was just out of balance even though I made it according to the recipe.  I’m still eating it just because I don’t want to waste, especially since I used real pumpkin purée.

The first batch of flourless peanut butter cookies I decided I was going to use 1/2 cup maple syrup instead of 1 cup brown sugar.  The batter was a bit thin, but not so thin that it was runny.  The cookie on the right is from this batch.  There was no rolling needed since the batter was thin and as you can see, the cookies were a bit thin after baking.  They weren’t sweet enough and my husband agreed.  However, they are very moist and still are 4 days later.  Since that batch was a bust, I made another batch the next morning.  My husband doesn’t like pumpkin pie, so basically the cookies were to ensure he had something for dessert, too.  The second batch I made (pictured on the left), I used coconut crystals.  The consistency was the same as my original batch.  My hands were such a mess from rolling out the first pan of cookies that I forgot to give them a little head start on flattening out before putting them in the oven.  I was rather surprised when I pulled them out and they were spread out on their own.  Score!

My husband was on the phone with his mom while the second pan of cookies was in the oven.  It was decided that since the roads were dangerous between here and Louisville, we’d reschedule.  So, I had all these desserts for just the two of us!  My husband then decided we had to go see  Tron.  Well, sure.  It’s rare these days that I get a full day with my husband and it’s even rarer when he suggests going to see a movie.  Plans were dashed due to weather, but I got to spend all day with my husband.