This year was my first gluten-free Thanksgiving.  We were expecting our friend, Caity, to join us for the weekend.  She has Celiac and I was looking forward to sharing being gluten-free for that holiday with her, as well as giving her some cooking lessons again.  Alas, due to my new job in retail with wild hours and her change in jobs without being able to visit for the entire week like originally planned, she decided she would postpone a trip to see us.  That left me with dropping the ball on planning what I would fix.  I had no idea and little energy to sit down and figure it out.

I knew I would make turkey, mashed potatoes, and cranberry sauce.  Beyond that, I was clueless.

I finally sat down one day and was perusing through Shirley Braden’s recipes at gfe – gluten-free easily.  I printed off several recipes and whittled those down to two.  Candy Carrot Coins and Super-Charged Garlic Lemon Broccoli.  I really wanted to try her Fried Calamari, but it was too ambitious for what little time I had to prep for Thanksgiving with my work schedule. 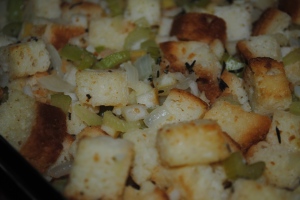 I did it though.  I bought some of Whole Foods’ gluten-free bread.  Risky since I had no idea what it tasted like.  But, it was the only gluten-free bread they had that would give me the most for what I was paying for.  I used an entire loaf for my stuffing.  I even diced it up and dried it two days ahead of time.  It was a lot easier to make than I thought it would be, too.  On Thanksgiving day, I sautéed the onions and celery my husband prepped for me.  Then I tossed it together with the bread cubes, chopped apple, and chopped sage, thyme, and savory.  Threw in some of my homemade chicken broth and mixed it well.  I put it in a baking dish and cooked it at 350 after I took the turkey out.  As with many first time dishes, I had no idea what to expect from this.  My final result was heaven.  At least for me.  I just wanted to eat the whole baking dish full and forget the rest of the food.  It did need more broth for more stickiness, but it was still moist and flavorful. 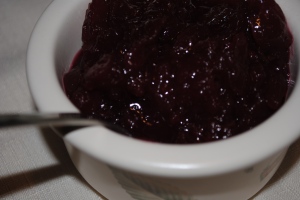 I made my cranberry sauce ahead of time.  The same day I dried the bread cubes.   I always make cranberry sauce from scratch.  I can’t even remember the last time I had it from a can.  Since I was making mashed potatoes and gluten-free stuffing, I wanted to make sure that the cranberry sauce was whole foods friendly.  This year, I used maple syrup instead of sugar.  I always add orange zest and the juice of an orange to the water.  I’ve also started to add a cinnamon stick in recent years.  It just gives the flavor more depth.  I let the sauce simmer a long time to let it reduce.  After sitting for 2 days in the fridge, it was just as thick as when I make it with sugar.  It wasn’t overly sweet either.  The bonus is that my husband doesn’t like cranberries, so the sauce was all mine.  Instead of gravy on my turkey, I use cranberry sauce. 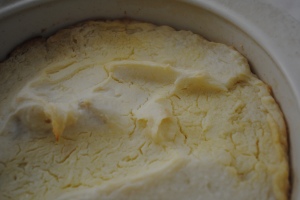 Calling my mashed potatoes “mashed potatoes” doesn’t really do them justice.  The recipe was given to our family by a friend and the name is really “Party Potatoes.”  But, that just doesn’t fit to me either.  While the potatoes are boiling, I whip together some cream cheese and sour cream.  I use more sour cream than the recipe calls for.  I leave the mixture in the mixing bowl and add the potatoes to the mixer little by little with a stick of butter.  So, they get whipped in the mixer.  There are some chunks at the end, but no one ever seems to mind.  I spoon the potatoes into a deep casserole dish that is greased with butter, then top it with a few slices of butter before it goes in the oven.  Yes, this baby is whipped then baked.  The beauty of the potatoes is you can prepare them ahead of time (minus the baking) and freeze them.  I usually bake the potatoes for 30 minutes at 350.

When I did the grocery shopping for Thanksgiving my eye caught some Brussel Sprouts on sale.  I couldn’t pass them up.  I had some bacon at home and I figured I’d try make the Brussel sprouts with the bacon since we liked the version at Eddie Merlot’s so much.  I kept it simple.  I cooked 4 pieces of bacon in a pan and set the bacon aside.  I added quartered Brussel sprouts to the bacon fat with some salt and pepper, covered and let it roast in the pan while stirring occasionally.  I crumbled the bacon and added it to the pan with about 5 minutes left to cook.  It wasn’t quite like Eddie Merlot’s, but it was still wonderful.

I have to give thanks to my extraordinary husband.  I couldn’t have made everything without his help.  Yes, I did prepare some things ahead of time.  But, he agreed to do all the prep work for me on Thanksgiving day for the veggies and herbs.  That gave me time to sit and enjoy time off my feet.  He even carved the turkey for me while I made the gluten-free gravy.

It was a spectacular first gluten-free Thanksgiving.  Now that I’ve navigated one holiday gluten-free, I look forward to Christmas.  Don’t ask me about plans though.  I’m still trying to get through the Christmas rush both at work and trying to get the last of the presents ready and mailed off.