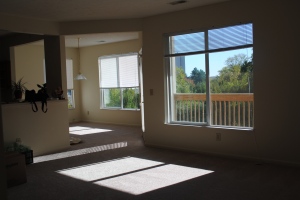 My head is full of a running to do list.  Things that need to be done in the next few days before the movers get here.  I thought about not blogging until everything is done and we are fully into our new place, but I blogging has become a bit of a retreat for me.  I can put away that running mental to do list and focus on something completely different for a while.  It’s also giving me a break from all the packing.  How did we accumulate so much stuff?  We’ve gotten rid of a lot through donating to Goodwill and through Freecycle.  The packing just seems never-ending right now.

I’m trying to go through all the food in our fridge and freezer to make sure it gets used up so we have less to pack in the cooler Tuesday morning.  I don’t know about you, but we’ve gotten a lot of different types of squash lately from our CSA and all the bloggers I like to follow are posting lots of recipes I want to try out.  Plus, two of them recently posted different ways to roast squash whole.  Well, duh, that IS easier isn’t it?  Why didn’t anyone tell me about that before?

I digress.  It’s the exhaustion from the packing typing.

Amy Green of Simply Sugar & Gluten-Free had a guest blog post from Alisa Fleming of One Frugal Foodie.  Alisa shared her recipe for Quick Asian-Spiced Kabocha.  I was immediately drawn in.  I love kabocha.  To me it’s like a blend of squash and sweet potato.  It’s a little denser than most squashes, has the texture close to a potato when cooked and is sweeter than most squashes.  I even roasted the dirty seeds after I cleaned it out.  It was a nice little appetizer before dinner.  I fully intended to follow her recipe to the letter.  However, as I was looking in my cupboard I realized I was out of wheat-free tamari.  This was life’s way of reminding me that the flavor profile probably wouldn’t fit too well with my Lemon Rosemary Chicken.  What I came up with was and adaptation of her recipe using the same amount of water, maple syrup instead of the evaporated cane juice or palm sugar, and coriander instead of the other spices.  I really had no idea if my adaptation would work.  The result was a slightly sweet and rich accompaniment to the chicken.  I only stirred it once after adding everything to the pan and the sides that were touching the bottom were slightly caramelized.

Add all ingredients to a pan/skillet and stir.  Cover and simmer for 20-30 minutes, or until the kabocha is fork tender.

When I was cleaning up the kitchen later, I discovered that I did have wheat-free tamari.  It was hiding on one of the kitchen counters.   Have I mentioned I’m in the midst of moving madness?  Boy, did I feel like a dork when I found it.  It’s okay though.  I still intend to fix Alisa’s recipe once I have more kabocha.

I enjoyed my adaptation so much I was thinking of how I could do something similar with sweet potatoes.  Ideas started rumbling around in my head.  Maple syrup.  Apples.  Cinnamon.  Ginger.  Cloves.  Ah, yes.  10 minutes into cooking, I dropped the packing I was doing and went to the kitchen to check on it because it smelled so good.  Surely it’s done after 10 minutes, right?  Wrong.  Once it was done, it was a food marriage made in heaven.  I think I will make this for Thanksgiving.

Add all ingredients to a pan/skillet and stir gently.  Cover and simmer for 40 minutes or until sweet potatoes are fork tender.

I have to caution you.  If you try these recipes you may want to eat both servings in one sitting.  I know I did.  I fought the temptation, though!

Now, back to packing and letting that mental to do list run wild.

Addendum: I am SO embarrassed.  This is what I get for trying to keep up with blogging while packing for a big move.  I used CORIANDER not cardamom.  I’ve changed the recipe to reflect what I really used.  If you made this with cardamom and it turned out horrible, my sincere apologies.  If you loved it, well then my mistake was your gain!   I do love using cardamom though and will share other dishes I use it in in the future.

This post is linked to Seasonal Sunday at Real Sustenance.