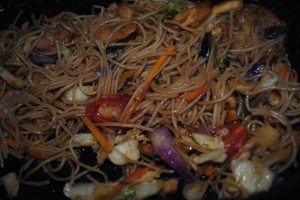 We don’t eat out much because of my diet restrictions and to help save money.  Since, I’ve randomly started looking up menu and allergen information online for restaurants in Louisville, I want to try things when I find them.  I think the discovery of the gluten-free menu at P.F. Chang’s several weeks ago prompted this.  It had been a while since I had Chinese.  Right now, it’s the only place that I know I can safely have Chinese food.  So what did we do when I was Cincinnati?  Go to P.F. Chang’s!  We had lunch there Sunday, but I forgot my camera, so the picture on the left is from my leftovers.   I took a picture with my phone, but the brightness of the vegetables didn’t quite come out.  I was very happy when the server came out with it and saw all the color from the vegetables.  Tomatoes.  Carrots. Red Cabbage.  Bok Choy.

I returned to Louisville just before lunchtime on Monday.  I could have found something to fix for lunch, but after a 2 hour drive, I just wasn’t up to it.  I went to Chick-Fil-A.  I can have their chargrilled chicken sandwiches without the bun and their fries have their own dedicate fryer separate from the chicken.  I don’t know about the Chick-Fil-As in your area, but the ones here are jam-packed during lunch rush.  More so than any other fast food chain.  When I got there, the manager was outside directing traffic in the parking lot.  The wait looked daunting, but the drive-through line went pretty fast.  I could have parked, but the parking lot is small and with all the cars I would have had to wait for the drive through traffic anyway.  What I was really impressed with was when I got home and pulled the “sandwich” out.  The first time I went to Chick-Fil-A to try the chargrilled chicken sandwich without the bun was last week and that’s what it was a sandwich without the bun.  However, when I opened this one, it was in a different container, there were 2 pieces of lettuce and 2 pieces of tomato on top of the chicken.  I was impressed.  I wrapped the lettuce around the chicken and tomatoes and picked it up to discover the layout of pickles on the bottom.  Yes, layout of pickles.  It wasn’t fancy.  But someone put some effort into the presentation.  I appreciated that.

So after getting back this week, I did some random searches.  I discovered that I can have my favorite at California Pizza Kitchen, BBQ Chicken Chopped Salad.  If you haven’t had that salad, you have to try it!  I’m a bit surprised that they don’t have a gluten-free pizza yet.  Maybe in time, they will!

There is a local Cajun restaurant in town called Joe’s OK Bayou.  For whatever reason, I decided to see if their menu was online.  Sure enough, it was.  Gluten containing dishes are not always obvious.  I know that cajun cooking uses roux (butter and flour) for their sauce bases, but I figured it was  worth a shot to email them and ask if they have anything gluten-free.  When I checked my email again later, I had an email from the owner himself, Joe Wheatley.  He was understanding, nice, and friendly in his response.  Sure enough, there isn’t much on the menu I can have.  We came to a consensus that the boiled items would be the ones I’d have to stick to.   It’s pretty frustrating to go into a restaurant to find yourself limited to 1/8th of the menu.  Thanks to Joe, I’ll know what I’m limited to ahead of time and his response makes me want to go despite my limited options.  I have to savor this because I know I won’t get the same reaction from owners or managers that I’ll be contacting to ask them the same questions. 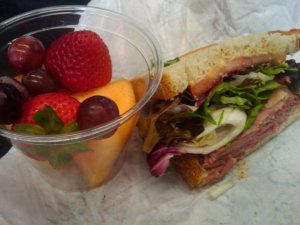 We are out a microwave at work.  I didn’t have time to prep anything cold for my lunches this week.  Luckily I only work 5 hours.  I figured I could make sure I eat my rather large breakfast later than usual and take a snack with me to hold me over until I get home.  It worked on Tuesday and Wednesday.  But Thursday was a different story.  I was a bit stressed out, especially after a horrible phone call with someone in the “quality assurance” department at Quantumlink Communications.  It’s rare that my ire is such that I want to reach through the phone and punch someone.  Today was one of those rare occasions.  Then things seemed to spiral down from there.  I think that took its toll on me and I burned through my breakfast faster than usual.  So, I ran to Jason’s Deli real quick to grab a sandwich.  If you read my blog post about my first experience with the gluten-free bread, you’ll remember the copious amount of pastrami that was on the sandwich.  I thought that maybe the amount of meat may have contributed to the disintegration of the sandwich resulting in me using a fork to eat it.  This time, I ordered a “slim” which is half the portion of meat.  You can’t see in the picture, but when I opened it up, the half not pictured was already falling apart.  Again, the more I handled it, the more it crumbled in my hands.   I either need to give up on having sandwiches there or go to another Jason’s Deli to see if the same thing happens with their gluten-free bread.

I’m happy about having more options when we choose to eat out.  Not so happy about disintegrating sandwiches.  *sigh* Maybe it just wasn’t meant to be.